View and manage your Donations History and Recurring Payments

Use these links to access your DONATION HISTORY and RECURRING PAYMENTS (does not include Raise a Flag donations).

You have the option to view and download a receipt, and cancel your recurring payments. Changing a recurring payment amount and frequency cannot be done at this time but will be available shortly.

You can also adjust the credit card information (within supported gateways) for your recurring payments so that if a card expires or you would like to use a new card you can update it through our website.

If you have any specific questions about your TOVP account please email us at fundraising@tovp.org

The DONOR ACCOUNT tab will only provide you with history of donations given through this website beginning June 13, 2018. For prior Donation History contact us at fundraising@tovp.org.

See all available payment options below 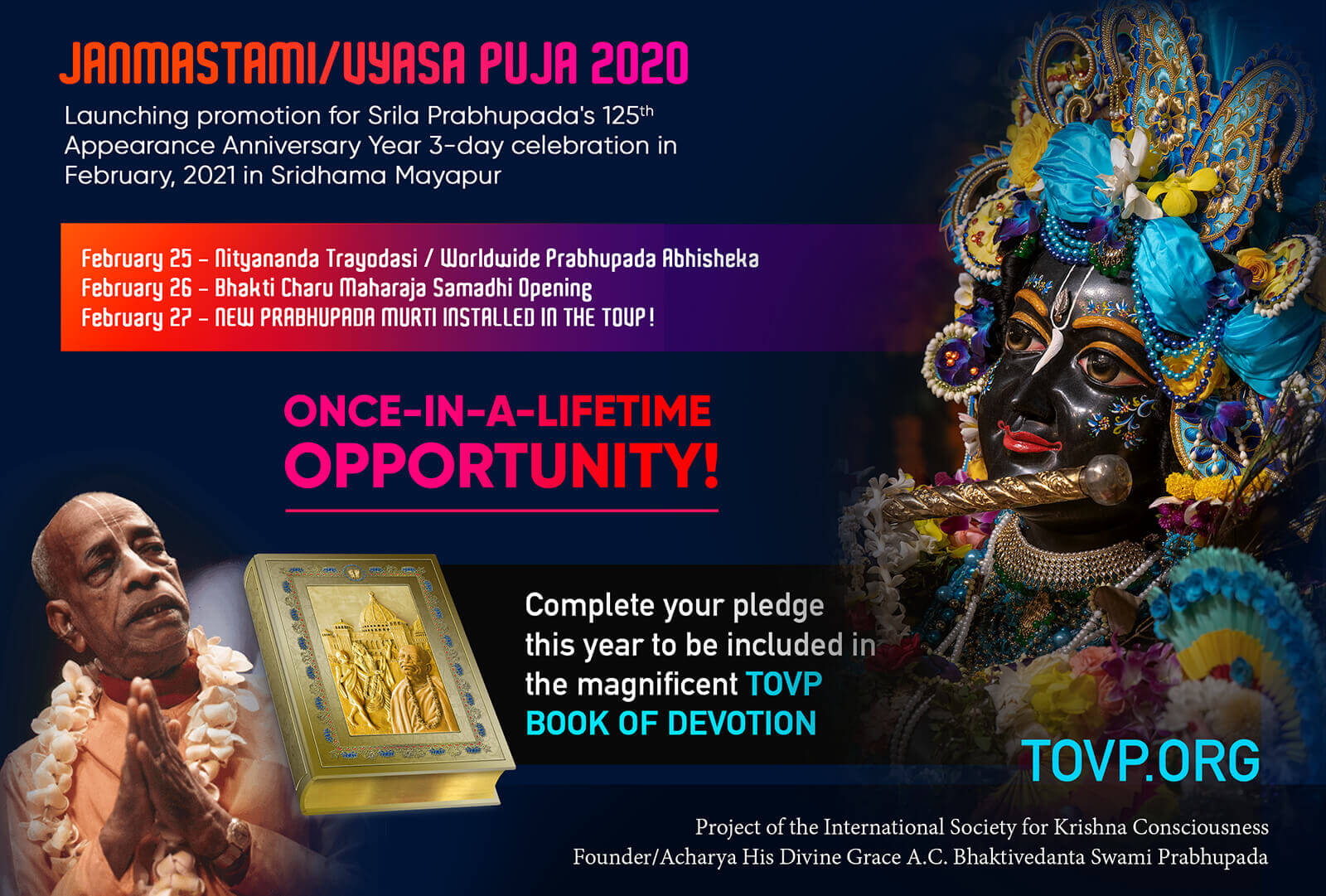 Janmastami and Vyasa Puja this year marks the launch of the TOVP Management’s announcement to the ISKCON world of our plans for the celebration of the 125th Appearance Anniversary Year of ISKCON Founder/Acharya, His Divine Grace A.C. Bhaktivedanta Swami Prabhupada. While the specific date of his Vyasa Puja is August 31, 2021, we have arranged two very special events to commemorate and worship the Samstapak Acharya for the next 10,000 years.

First, we are organizing a three-day festival that will include Lord Nityananda’s Appearance Day (the adi-guru) on February 25 along with a special in-home, live streamed Prabhupada Installation Program, the official worldwide Opening of the Samadhi of His Holiness Bhakti Charu Maharaja on February 26, and the INSTALLATION OF THE NEW PRABHUPADA MURTI IN THE TOVP on February 27. This installation is of monumental importance as it places Srila Prabhupada in the TOVP to watch over the completion of the project. Six different kinds of abhishekas will be offered and we encourage your support during this Janmastami/Vyasa Puja time. Sponsorship opportunities are immediately available as part of our worldwide combined guru dakshina campaign. Read more at the address below:

Second, for Srila Prabhupada’s Vyasa Puja we will be offering him a one-of-a-kind, magnificent, gold-leafed Book of Devotion containing the names of TOVP donors. This offering of the names of donors to Srila Prabhupada on this most sacred occasion will symbolize the incredible support from all his followers worldwide who have helped to make his dream a reality. The book will be an amazing artistic piece, 15″ (38 cm) x 20.5″ (52 cm) in size and 55 lbs (25 kg) in weight. To have your name included in the TOVP Book of Devotion, complete your pledge by December, 2020 (starting Nrsimha Bricks and up), or make and complete a new pledge. Read more at the address below:

We pray that you all have a wonderful Janmastami and Vyasa Puja celebration this year, and we continue to pray to Lord Nrsimhadeva for the continued protection of all devotees worldwide.

Help complete the TOVP by 2022 and make Srila Prabhupada's dream a reality.